Can I Eat Beans on Keto?

Beans are easy to obtain, tasty, and highly nutritious. But can I eat beans on Keto? If you’re on this low-carb high-fat diet, you might be asking that question. So, what’s the answer? Well, most beans are far from being Keto-friendly and not advisable to take when trying to cut down carbs from your meals. Why is that so considering beans are said to be protein rich? Read on to find out why. Also, about what to eat instead and continue to enjoy delicious legume meals.

First, a thing or two about Keto

Before delving into the reasons why beans are not advisable when on Keto, let’s see how this form of dieting works. The Ketogenic diet requires that you only eat foods that are high in fat content and low in carbs. Now, the human body breaks down the carbs that we eat for energy. When these are not available, the mechanism to obtain energy turns on the body’s fat deposits.

The idea behind Keto is that you starve the body of carbs so that it resorts to the burning of fats. That process is called ketosis and triggered when your diet contains levels of carbs that are too low for the body’s daily needs for energy. When fats are burned, your body becomes leaner, with less fat deposits, and your overall health improves.

To trigger ketosis through a diet, you need to ensure that fats make 75% of your daily calorie intake, proteins 20%, and carbs a mere 5%. These figures vary from one Keto dieter to another, though, and are influenced by several factors such as gender, activity levels, weight, and the specific dieting goals. However, the general rule applies in all situations; more fats, moderation in protein intake, and extremely low amounts of carbs.

As a low carb dieter, achieving success depends on how strictly you adhere to the diet’s restrictions. A lapse could mean wasted efforts, slowed progress, and delayed results. Because Keto involves food restrictions, knowing what to eat and what not to is essential. It helps to ensure that you don’t exceed Keto limits for carb intake. The process of ketosis is controlled by the diet that you choose to follow. That means the wrong choices can affect what success you achieve with this diet.

Where do beans fall in all this? Let’s see.

Beans and the Carbs

Despite being tasty and nutritious, beans can derail your Keto goals. These legumes contain a fair amount of carbohydrates- high enough to make them unsuitable to eat if on a low-carb diet. To illustrate that more clearly, let’s look at the carbohydrate levels in different types of beans. Carbohydrate amounts here are expressed in terms of net grams. That means the value doesn’t include the fiber content.

As you can see, many bean varieties contain significant quantities of what you want to avoid in Keto (carbs) and little of what you need most (fat). Eating them increases the amount of carbohydrates in your body and the chances of ketosis are hampered significantly. Moreover, bean carbohydrates are not easy for the body to digest. That’s why eating these legumes results in bloating, constipation, cramps, and other problems.

What if You Eat Beans on Keto But in Moderation?

If you have to consume beans for one reason or another when on Keto, it’s advisable that you consider taking them in small quantities. A half of a cup would do- or less. That doesn’t mean its right, though. That amount of beans places your intake of carbs close to what’s not recommended in Keto, and you risk going overboard at any time.

Because it’s difficult to tell how much more carbs before you exceed your daily limit, avoiding beans altogether is more advisable. That way, you can be sure that you’re truly on a low-carb and high-fat diet plan. Doing away with beans doesn’t mean eliminating ball legumes from your Keto diet, though. There are various other options that you can try out.

Alternatives to Beans When on Keto

These are soybean foods that contain low levels of carbohydrates. Eating them wouldn’t affect your dieting restrictions since they are Keto-friendly on all fronts; high in fat and low in the amount of carbs. Here they are.

This variety of soybean is a safe option if looking for something that can replace beans. One cup of Eden black soybeans only provides 2g net carbs, which is low enough if on a Ketogenic diet. It means you can eat a full cup of these legumes and not exceed the diet’s daily intake of carbohydrates. Furthermore, Eden Black soybeans are rich in fat, with one cup containing up to 12 grams.

Though not as low in net carbs as the Eden Black Soybeans, Edamame is a great alternative to the usual beans. One cup of this soybean pod snack contains 8 grams of net carbohydrates and 8 grams of fat. The Edamame pods are usually steamed, sprinkled with sea salt and served alongside main meals. These delicious legumes are favorite food in the Asian countries where they’re a common appetizer. 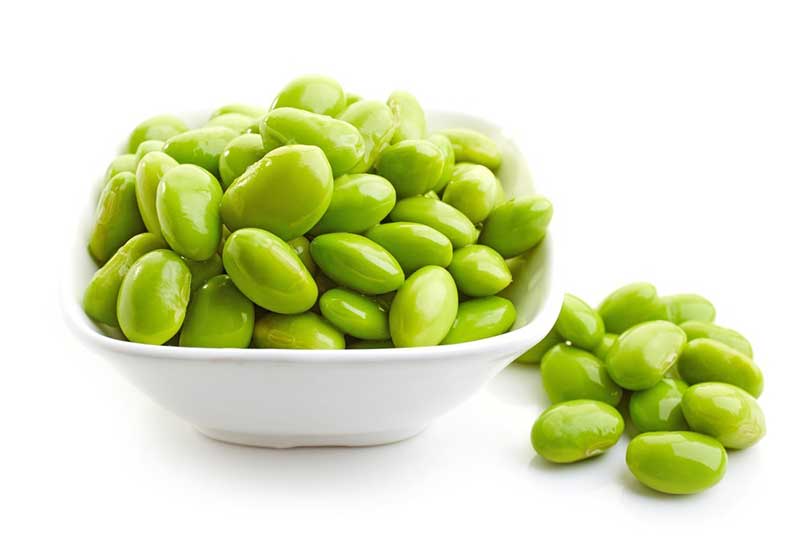 Beans make tasty meals. However, eating them when on a Ketogenic diet is not advisable. They’re not only rich in the carbs that are not needed in this diet, but also deficient in the much-required fat. Eating them, therefore, only increases the chances to go beyond what’s allowed when observing a low carb regimen.

If you’re on Low Carb, it’s advisable that you avoid beans altogether. And if you have to, limit the amount per serving to less than a half cup to abide by the carb intake rules. Better still, you may want to consider other options such as the soybean variety Eden Black and the soybean pod snack, Edamame. These contain just the right quantities for both fat and carbohydrates, and eating them when on Keto would be a lot safer.

10 Most Common Low Carb Mistakes You Should...

What to Watch Out For When Buying Keto...

How To Cook Zucchini