Chili con Carne is one of my favorite meals since I remember, even though my dad tried very hard to disgust it to me, putting so many spices that my mouth still burned two days after eating it. (I was around seven years old at that time). But I was a resistant kid, and I didn’t get discouraged.

The original recipe though contains some food which isn’t low carb friendly, so I decided to remake it a bit. Primarily the beans had to go. If you want to learn about beans on keto, read here.

Chili con carne, commonly known in American English simply as “chili,” is a spicy stew containing chili peppers, meats, and often tomatoes and beans. Other seasonings may include garlic, onions, and cumin. Variations, both geographical and personal, add different types of meat and ingredients.

In Spanish, the word Chile from the Nahuatl “chili” refers to a “chili pepper,” and carne is Spanish for “meat.”

The original recipe consisted of dried beef, kidney fat, dried chili peppers, and salt, which were beaten together, made into bricks and allowed to dry, which could then be boiled in pots on the trail.

The San Antonio Chili Stand put into operation in 1893 Columbian Exposition in Chicago, helped people taste and appreciate Chili. San Antonio was a tourist destination and helped Texas-style Chili con Carne spread to the south and west. Chili con carne is the proper state court of Texas, as designated by House Concurrent Resolution Number 18 of the 65th Texas Legislature during its regular session in 1977.

Beans, a staple of the Tex-Mex cuisine, are associated with chili as far back as the early 20th century. The question of whether beans “belong” in chili has long been a matter of dispute amongst chili chefs. See? So our keto Chili con Carne doesn’t go against the original recipe rules.

Always keep on mind while cooking ground meat for Bolognese or in this case for Chili, the longer it cooks, the better. The time given in the instructions is the minimum necessary. Profi chefs cook it at lowest simmer likely around 4 hours. You can also add grated cheddar cheese on the top. I’ve added one aligned tablespoon of chili and Cayenne pepper. Be creative, and leave a comment if you like the recipe or share your improvements! 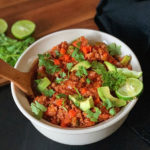 Lucie Share22Pin2YumEmail24 SharesChili con Carne is one of my favorite meals since I remember, even though my dad tried very hard to disgust it to me, putting so many spices that my mouth still burned two days after eating… Print This
Serves: 4 Prep Time: 15 Min Cooking Time: max. 45 Min. max. 45 Min.
Rating: 5.0/5 ( 1 voted )

Shrimps With Dried Tomatoes And Spinach