And again a pumpkin recipe. But I can’t help myself pumpkin is probably the most versatile vegetable in the world. You can use it anywhere. Savory meals, side dishes, desserts, as in this case – for cupcakes. Who went through my blog a little bit already knows, I am more a cook than a baker. Baking cakes and decorating them doesn’t really belong to my fortes. I am trying my best. But when I already decide to bake something for my family, friends, I usually use a recipe from more experienced ones. That didn’t happen in the case of pumpkin cupcakes (even if it was better). So I had to try them three times to bring them to a version I can share with you guys. But I have to admit I am satisfied with the result now.

What I love about cupcakes is the size. I never was a big fan of sweets and desserts, and when I ordered one in the restaurant, the portion was too big. Cupcake is a great bite, sufficient coffee supplement. Funny is, that cupcake is also called as a ” little selfish cake.” Food tells more about than we think. When you cook a cake, you do it because you want to regale someone, it’s not just for you. The cake slices, everyone takes a piece, someone bigger, someone smaller, someone one, some two, but everyone shares a cake. There is something symbolic about it that connects people.

Cupcake originated exactly for the opposite purpose: everyone will have their own, though same, but their own. There is a lot of symbolic in a small, sweet, and often sinful, good cupcake. It first appeared officially on the scene in 1828, when a recipe for a cupcake in Eliza Leslie’s Seventy-five receipts for pastry, cakes, and sweetmeats appeared. A recipe for a similar dessert appeared in 1796 in the Amelia Simmons cookbook, but it did not yet work with the term cupcake, so the authorship belongs to Leslie.

But it’s contemporary look, a small, often over-decorated tart, cupcake gained much later. There is nothing left from the original Leslie’s cupcake recipe. On the contrary today there are thousands of different recipes, and distinctive decoration decides whether it receives a place of honor in the cupcake competitors world or not. I am sure my pumpkin cupcake wouldn’t win by appearance. But the taste was delicious. My husband is my personal critic (I want him to be). And he loved them.

Pumpkin in desserts is the best replacement for sugar! I mean it, give it a try before you start putting low carb sweetener inside. I use to bake the pumpkin in the oven before I make a purée. Just slice into moons, and bake for around 25 minutes by 180°C (360°F). The taste is much more fuller. But if you can’t bake it for some reason, cooking in water will also do fine. Turmeric I used for the color, but mainly for its health benefits. 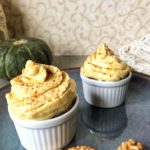 Lucie SharePin2YumEmail2 SharesAnd again a pumpkin recipe. But I can’t help myself pumpkin is probably the most versatile vegetable in the world. You can use it anywhere. Savory meals, side dishes, desserts, as in this case – for cupcakes.… Print This
Serves: Many Cupcakes Prep Time: 15 min Cooking Time: 45 min 45 min
Rating: 5.0/5 ( 1 voted )