Gyoza are dumplings filled with ground meat and vegetables and wrapped in a thin dough. Also known as potstickers, gyoza originated in China (where they are called jiaozi), but have become a popular dish in Japan. The typical gyoza filling consists of ground pork, chives, green onion, cabbage, ginger, garlic, soy sauce, and sesame oil, but nowadays many restaurants also came up with a range of other fillings.

I love the original gyoza. And as the filling is entirely compatible with the keto rules, I only had to find the perfect substitute for the dough wrap. My first adept was cabbage according to its excellent wrapping skills, and so this is how keto cabbage gyoza has born! I have huge experience with eating the original Chinese dumplings, and these were at least so good as them!

The given ingredients are for around 12 dumplings. I recommend to double or triple the amount. First, because they’re so good, you won’t stop eating, and second, it is not the type of meal you prepare in ten minutes so that it’s worth the time. One cabbage head will still be enough for the wrapping even if you triple the dose.

How to cook the cabbage

Cut a deep cone-shaped incision into the bottom of the cabbage and remove the core. Place the whole cabbage, bottom side down, in a large pot, at least half-submerged in salted boiling water (before adding the cabbage turn the heat to low to make the water only simmer).

Cook the cabbage, turning it occasionally until its leaves start to soften. Gently and carefully, without ripping them, pull off the leaves one at a time as they soften and become loose. Preferably use tongs and be careful not to burn yourself with the boiling water.

Place the boiled leaves to drain in a large colander or on paper towels. The softened leaves should bend easily, without breaking — if necessary, cook them for a few minutes longer in boiling water to make them more pliable. Leave the smallest leaves at the very core of the cabbage attached as they are too small to be filled. They can be used to patch up the larger leaves in case these are ripped.

How to stuff the cabbage

Stuff the cabbage leaves: place the leaves one at a time on the work surface and spoon about 1 – 2 tablespoons of stuffing on the convex side of one leaf, fold the bottom part of the leaf over the filling, fold in the sides and continue rolling to enclose the filling. Repeat with the remaining leaves and stuffing.

Hope you love the Keto cabbage gyoza recipe, guys. And if you do, I’ll be very happy about a comment. 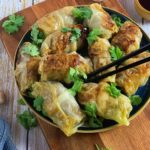 Lucie Share20Pin44YumEmail64 SharesGyoza are dumplings filled with ground meat and vegetables and wrapped in a thin dough. Also known as potstickers, gyoza originated in China (where they are called jiaozi), but have become a popular dish in Japan. The… Print This
Serves: 12 gyoza Prep Time: 20 Min Cooking Time: 45 Min 45 Min
Rating: 5.0/5 ( 1 voted ) 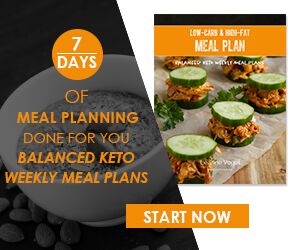