Those who know me a little, already know, I am more a savory tooth than a sweet fan. First, I merely prefer the salty taste in front of a sweet one, and second I am too lazy to bake. But Keto French Toast has this perfect relation between sweet and savory. The advantage of making desserts at home are among others the possibility to hold the sweet taste in moderation. For me, I usually leave out all low carb sweeteners, and only put little honey or maple syrup for the kids. (Honey or maple syrup aren’t low carb but for kids in my opinion better option).

If I haven’t had children, I wouldn’t be probably baking anything. So they are my motivation because it is better to make them some homemade dessert than to feed them with unhealthy, industrially processed candies, chocolates and, other stuff called “food.” And this low carb friendly toast so-called “French” is so easy to make. And it takes only a few minutes to prepare a great Sunday breakfast for the whole family. This keto version is unrecognizable from the usual ones. My kids almost ate it with the plate. I ate like six of them (only halves ?), and then went to workout! I always say: “I do sports so I can eat a lot”! Who agrees?

You can also involve your fantasy, and play with the serving ingredients. You can add to your Keto French Toast berries, sour cream, anything that your heart desires. I prefer it simple. I love cinnamon even in combination with a savory taste. This is actually what I really like about restricting carbs, I learned to appreciate all the unique flavors, whether salty or naturally sweet. That is the main reason why I don’t use any sweeteners because I like to enjoy the real taste of food.

While you are baking the toasts in the pan, be careful, that they won’t burn. It goes really fast. So preheat the butter, and when melted, set the heat to maximum low. Add the coated keto bread, and keep checking the downside, so you don’t miss the moment when it is golden brown and starts to be more black. 🙂 It takes only around 30 seconds.

In the beginning, I said, that this Keto French Toast version isn’t to recognize from the real French Toast. This is not entirely true. Because the original recipe is so sweet, that after two bites my teeth would start to tingle. I know, there are two different camps in case “keto.” There are those, who only want to reduce weight, and then those, who try to improve their health or eating habits. It doesn’t matter in which of those two groups you belong to. Just try to eat real foods, and avoid all kinds of products they are trying to sell us as “healthy,” in fact, it is only a business! 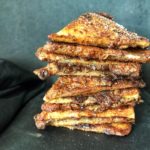 Lucie Share1Pin8YumEmail9 SharesThose who know me a little, already know, I am more a savory tooth than a sweet fan. First, I merely prefer the salty taste in front of a sweet one, and second I am too lazy… Print This
Serves: 2 Prep Time: 10 min Cooking Time: 5 min 5 min
Rating: 5.0/5 ( 1 voted )