Keto Oopsie bread, also known as cloud bread is meanwhile pretty famous. Still, I meet many newbies who never heard about it, and that is a shame. This is of course, not my invention and honestly, I don’t have a clue who invented this keto bread recipe. I followed the method of Diet Doctor https://www.dietdoctor.com. I am not a big baker indeed not of bread. The most bread recipes consist of two many seeds and nuts flour which makes the bread to a caloric bomb. I instead collect my calories with tasty bacon. Hehe.

What I really appreciate about this recipe is the easiness and low demands on ingredients. You decide to eat bread, and you have it within 40 minutes of inclusive prepare and baking time. This recipe is also very versatile because you can add all different flavors and seasonings according to your taste. It tastes fantastic as a sandwich with your favorite filling, you can use the cloud bread as hamburger buns. Fantasy has no boundaries, and there are too many possible variations. My kids love them spread with butter and homemade chia jam. Also, one keto Oopsie bread comes out with only 1g carb!

You can keep the keto bread up to three days refrigerated. Only make sure you put a layer of parchment paper between each Oopsie so that they won’t stick together. In the freezer, they can stay around three months. Thaw the bread at room temperature and warm up in the preheated oven at 150C(300F) for 5 minutes.

And now the critical part. I heard from many people they weren’t successful, and their bread wasn’t cloudy at all. The egg whites in this recipe are the key. They have to be so stiff that if you turn the bowl upside down, they won’t move. Cream of tartar can help with that. Add it in the egg whites while mixing when their consistency is already foamy. When you combine the yolks with the cream cheese, you have to make sure the mixture isn’t lumpy. The dough has to be entirely smooth before adding stiff whites. Because after adding them you can’t stir anymore only carefully fold the mixture from the bottom to combine. With the help of a tablespoon create six equal piles on a with parchment paper layered tray. 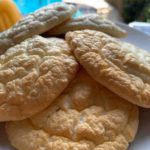 Lucie Share1Pin6YumEmail7 SharesKeto Oopsie bread, also known as cloud bread is meanwhile pretty famous. Still, I meet many newbies who never heard about it, and that is a shame. This is of course, not my invention and honestly, I… Print This
Serves: 6 Oopsies Prep Time: 10 Min Cooking Time: 25 Min 25 Min
Rating: 5.0/5 ( 1 voted )

No images found!
Try some other hashtag or username